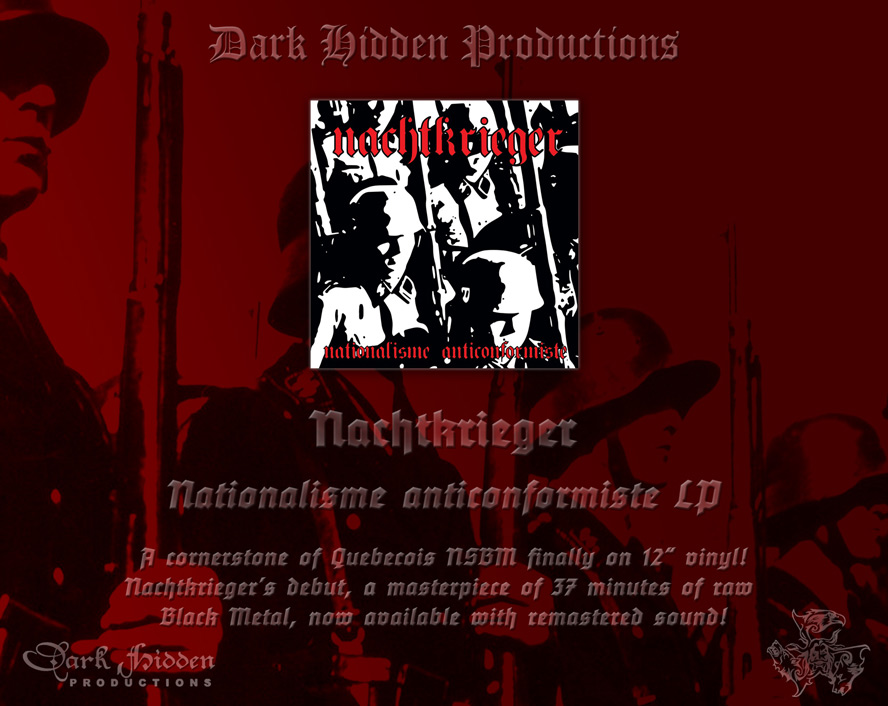 CIEL NOCTURNE discography on vinyl format!
"Demo I", "Season of Solitude" and "Dernière Salve":
three separate LPs of the rawest cold and nostalgic
Black Metal from this occult French horde! 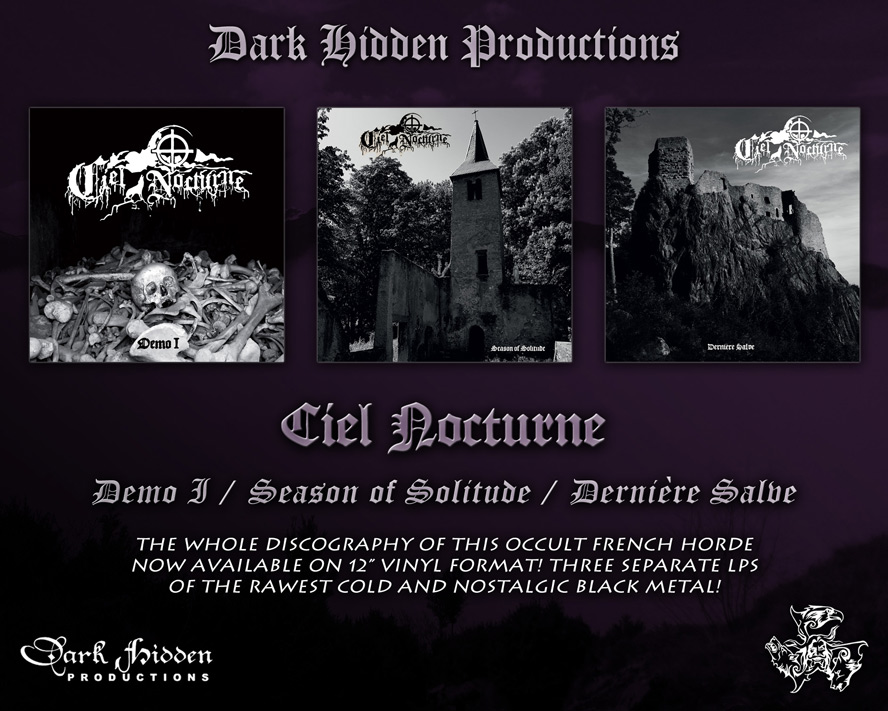 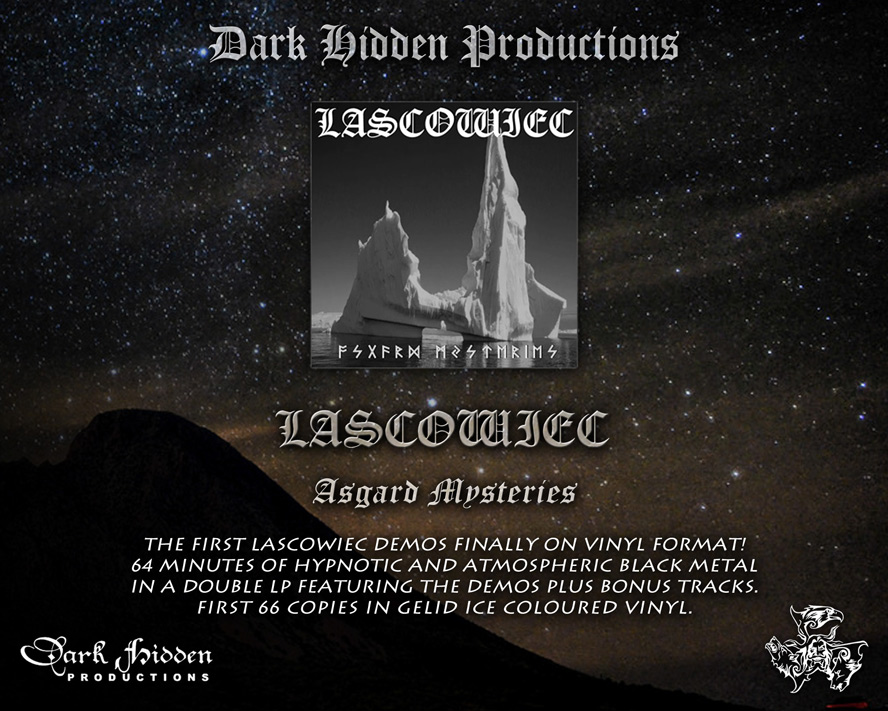 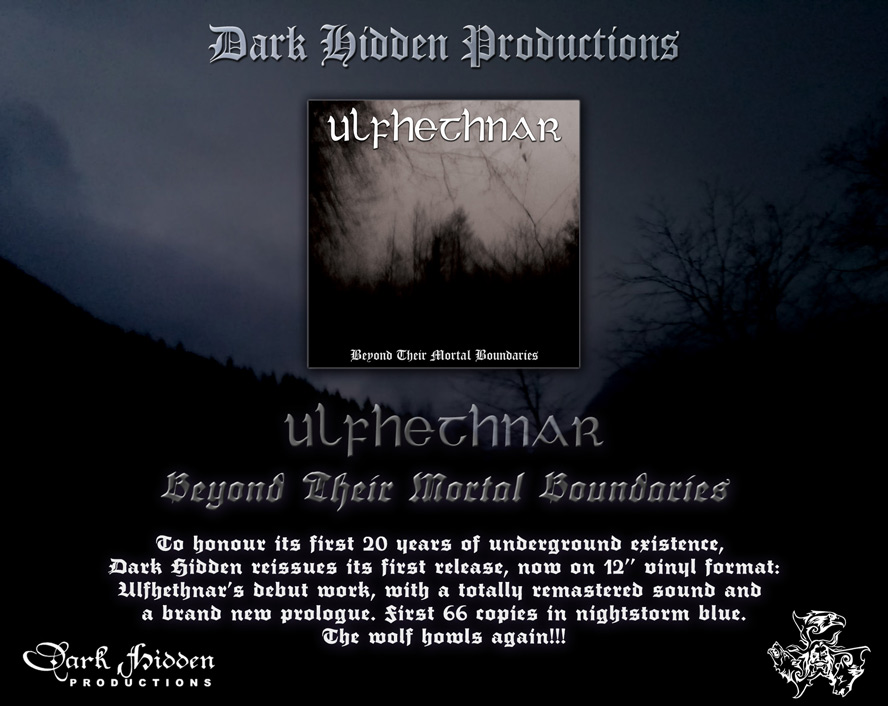 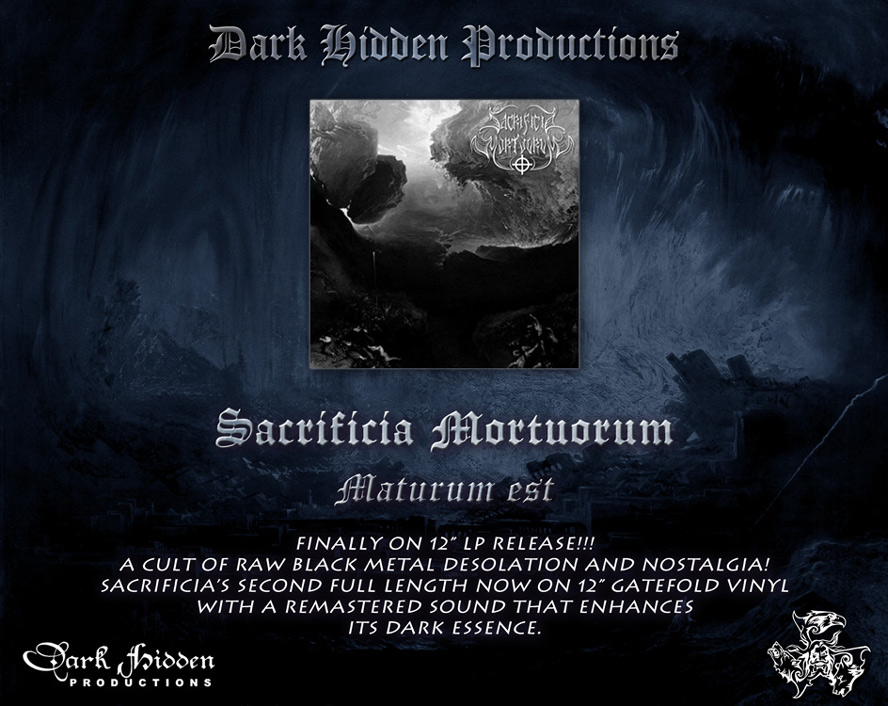 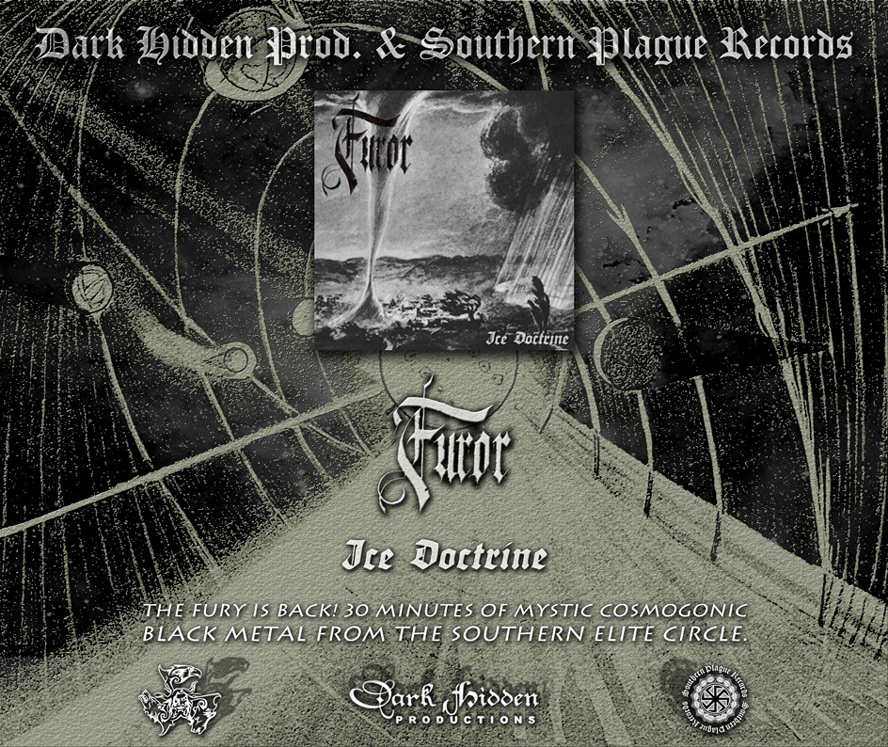 NACHTGEBLÜT "Dying Echoes of a Past Forlorn" is out!
Twelve years after delving into the ancient times,
the echoes of that forgotten past finally return:
almost an hour of Baroque-inspired Black Metal
& Neoclassical compositions hailing the purest art. 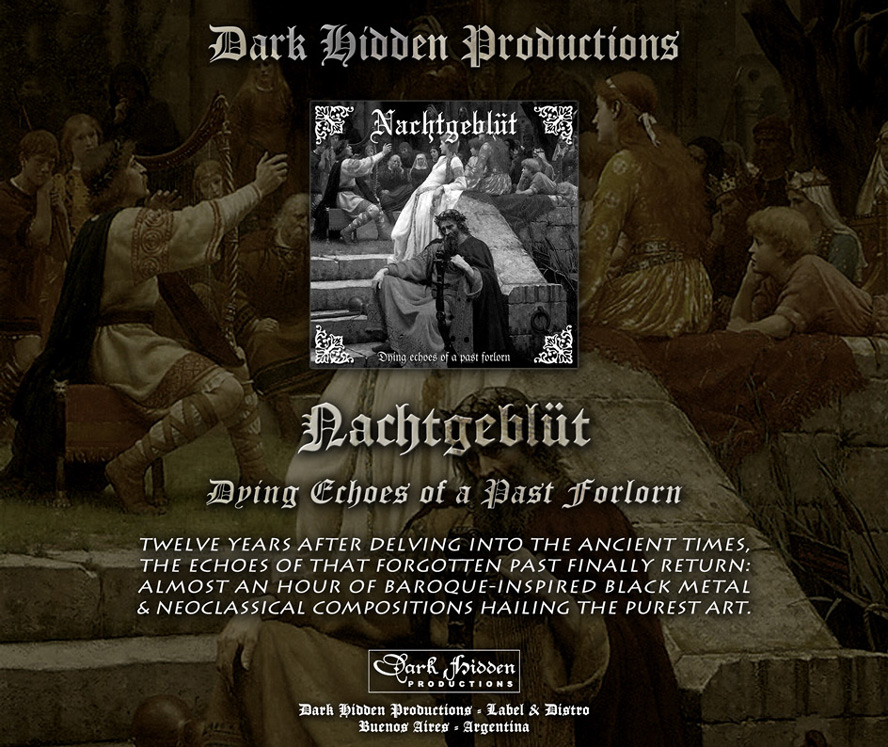 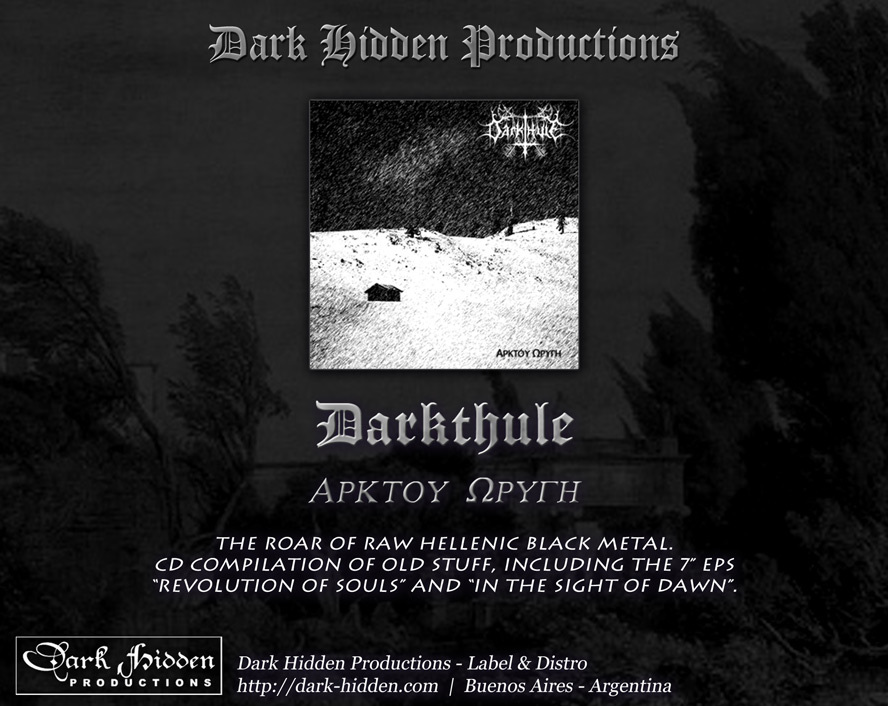 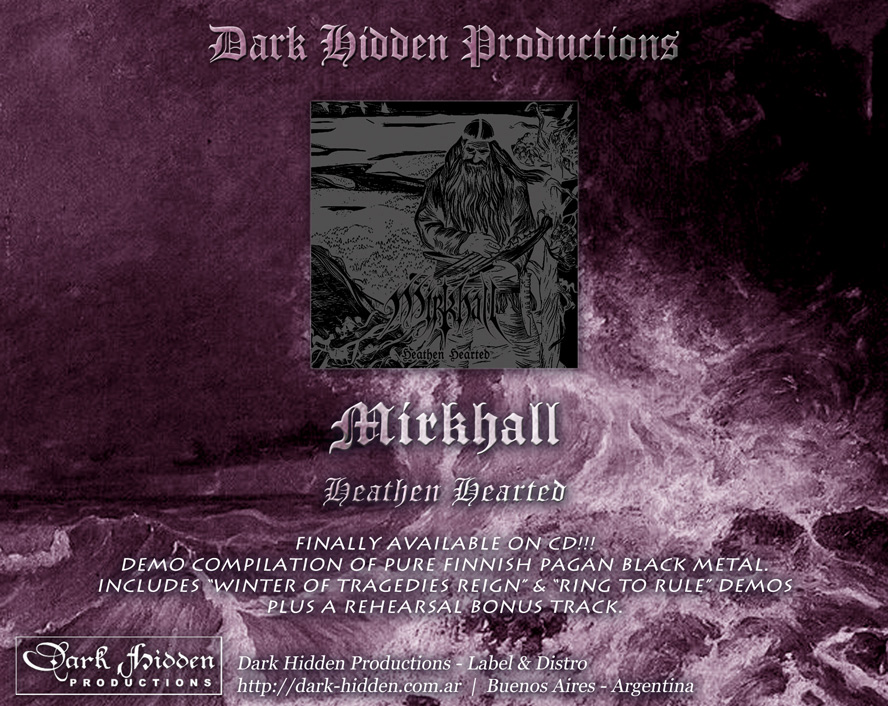 LASCOWIEC "Frostwinds of the Apocalypse".
New album, more grim and cold than ever. 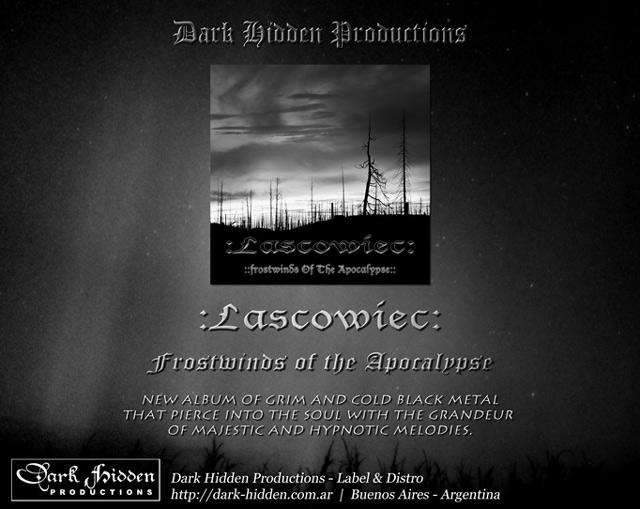 After seven years of silence, the fury is back:
ULFHETHNAR "Reawakening the Wrath of Yore".
Eight wounds of grim and raw Black Metal for the elite. 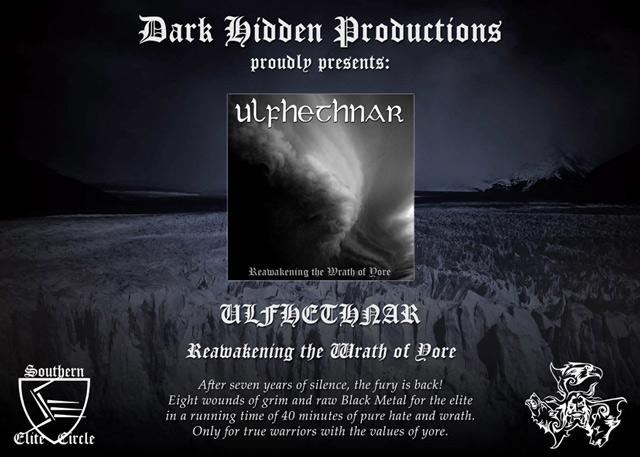 Out now: OSKAL "Stahlkrieg / Blazes of Sunset" CD,
gathering of the two demos recorded in 2004.
Raw and harsh Black Metal from Russia in the BBH vein.
Limited to 1000 copies.

After some great delays, the "Southern Elite Circle
Compilation" is finally out! More than 72 minutes
of pure elitist Black Metal in one CD containing
the most radical hordes from Argentina.

Dark Hidden Prod. proudly presents a re-release of
DARKTHULE "Beyond the Endless Horizons" CD,
including the early demos "Summon thee..."
and "Awakening of the Ancient Past" as bonus tracks.
Almost 64 minutes of the greatest Hellenic Black Metal.
Limited to 1000 copies.

New release: DRAUGURZ "A yell from the past" CD,
compilation of the greatest pieces of this atmospheric
Heathen Black Metal horde with strong Burzum influences,
featuring some previously unreleased tracks.
Limited to 750 copies.

CAMPO DE MAYO's second ep,
"Playing with toys that would have been
dangerous even for Plato's Republic ep", is out now,
again in a clandestine ultra-limited first edition
in CDr for near comrades.

The first ep of CAMPO DE MAYO,
"Renewing the call for war", has appeared in a clandestine
ultra-limited first edition in CDr for near comrades
because of printing houses refusing to do such an artwork.